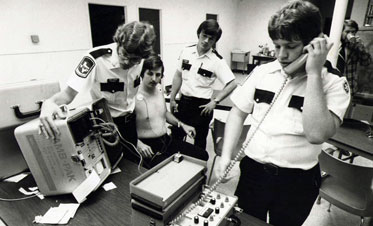 This month, my column will take a slightly different twist. The reason will soon become clear. Believe it or not, I am actually somewhat shy. My wife often says that I am “a man of few words.” My response is that I write so much that I have little left to say. I also tend to be somewhat private. I am often asked about my family, and how I got into this profession called EMS. I usually don’t elaborate. Perhaps it is time to tell.

On March 11, 2008, my wife and I will celebrate our 30 wedding anniversary. It hardly seems that long. Many people these days seem to have had as many marriages as automobiles. We somehow beat the odds. I met Emma Ramirez when I was an EMT with the ambulance service in Fort Worth. I was in paramedic school, and she had just moved to Fort Worth from a small town in west Texas. She was an emergency room clerk, and I was an ambulance driver. What caught my attention was the fact that she always smiled and never seemed to mind handling extra work. She was often called to various parts of the hospital to translate and never seemed to complain.

She had been warned to stay away from the ambulance drivers for reasons we don t need to go into here. But, I was persistent, and we started to date. My roommate at the time, Scott Mitchell, worked the opposite shift from me, which made for an ideal living arrangement. (Scott is now the assistant chief at the Flower Mound, Texas Fire Department.) Life was hard. We worked 24 hours on-duty, 24 hours-off duty, and 48-hours on-duty every other weekend. In between, we went to school. On our off weekends, we would head to Austin and hit the Armadillo World Headquarters and listen to Willie Nelson, Waylon Jennings, Stevie Ray Vaughn, Jerry Jeff Walker and others. Emma soon came to accept the EMS culture, although she never fully understood it.

We dated for several years (as was the custom in those days) and married. We rented a duplex in south Fort Worth and soon purchased our first home. Our son, Bryan Edward Bledsoe, II, was born Dec. 19, 1979 — more than a year after we married (as was the custom in those days). I finished paramedic school, worked and began teaching. Emma also continued to work because we needed both salaries to get by. I had already somehow graduated from college (it took me six years to get a bachelor’s degree). I continued in graduate school, ultimately planning to get a Ph.D. Fortunately, I was able to land a job with the local medical school teaching ACLS, PALS and EMS programs. It was great, and I still found some time to work the streets.

The road to my medical degree
I really enjoyed the academic environment and wanted to teach basic sciences in a medical school. However, members of the faculty encouraged me to go to medical school. Eventually, I saw the differences in income potential between scientists and physicians. So, in 1981 I took the Medical College Admissions Test (MCAT) and applied to medical school. The first year I applied, I didn’t get in. So, I applied again the following year and was accepted to several M.D. and D.O. schools. I decided to attend Texas College of Osteopathic Medicine because it was where I worked. I could continue to work in the ambulances, and we could keep our house and lifestyle. In July 18, 1983, 20 days before I started medical school, our second child, Andrea Lynn Bledsoe, was born. Our children both had the same mother and father (as was the custom in those days).

Medical school was a bitch. It was equivalent to a 40 semester-hour load. We had class from 8 a.m. to 5 p.m. Monday through Friday. You had to stay every night (and most weekends) to do required cadaver dissection and other lab work. I was always a pretty good student, but this was an awakening. Times were hard for us financially and emotionally. I was always gone, and Emma was raising two kids alone. I remember the two of us sitting on the floor, crying and rolling pennies so we could buy diapers for Andrea. Fortunately, I was in school before oil went bust in Texas. All medical schools in Texas were state institutions, and my tuition was only $400 a year (that is not a misprint). We decided Emma would stay home with the kids, and we would take on the extra debt — a decision we’ve never regretted.

Life after med school
I finished medical school and completed a good residency program. I returned to my hometown and began the full-time practice of emergency medicine. But, we never forgot where we came from. Emma was (and still is) a bargain shopper and quite frugal. We have nice things, but nothing overly extravagant. In 1983 I was enticed into writing a pharmacology book for Brady. The book,Prehospital Emergency Pharmacology,was popular and is now in a seventh edition. Other publishing opportunities came my way, including the chance to write the first major paramedic text since Nancy Caroline’s originalEmergency Care in the Streets.Believe it or not, I wrote 85% of the book and did so during the first year of my residency. (I’ve always had somewhat of an obsessive/compulsive streak.)

Life has been good to us for the most part. I love writing and have replaced my medical income with royalty income. Thus, I’m my own boss, set my own hours, work at home and enjoy what I do. I enjoy getting out and speaking at conferences. It’s easy to have tunnel vision when you sit and write. It’s important to get out and see how your work benefits people. I’m careful not to make commitments I can’t keep or don’t want to do. Learning to say “no” was one of the hardest things for me to learn.

Today and beyond
Today, life remains good. Our son joined the U.S. Army shortly after the attacks on the World Trade Center and Pentagon. He was assigned to psychological operations and was in Iraq for 14 months beginning with the invasion. Those were terrible times. We couldn’t communicate with him (except monthly when he got to use a SAT phone for 5 minutes). We got our information from Fox News and other sources. We were on pins and needles for months and watched coverage of the war for hours at a time, trying to figure out if our son was OK. In fact, we didn’t turn the television off for several months. Bryan made it back OK. He had some problems readjusting to civilian life but finally straightened out. He’s finishing his degree and going to law school. He’s engaged to be married in a large Catholic ceremony next summer. We’re all quite excited.

Our daughter is married to a family practice resident who graduated from the same medical school I attended. They live in southern Oklahoma, are quite happy and see us every weekend. She has a son, Andrew Bryan Lane Garrett, whom we simply adore. He’s our only grandson and spends his summers almost entirely in our pool. We love to fish salt water and travel. Like most families, we don’t spend enough time together.

Do I have any secrets for staying married 30 years? I’m not that intuitive. I met Dr. Phil McGraw once at the University of North Texas. He just looked at me and shook his head. But, I have some advice. First, make sure the person you marry is first your friend. Second, always be honest and admit mistakes. Third, never forget where you came from. As soon as you get caught up in titles (like “Doctor”), material things, and money, then you’re on a course for absolute misery. I’ve seen it happen many times to my physician employees. Remember, there is a lot more to life than “having things” and “being important”. It’s best to first be a good person. Respect your spouse’s culture and beliefs. Listen to your spouse. Sometimes it’s what they don’t say that is most important. I believe that, at least for us, being quite different from each other is a factor in staying married so long. Emma has no interest in anything medical. She has very little interest in my writing as such (although she’s proud of my accomplishments). Her life is her family — especially our grandson and two children. But, she’s also close to her sisters and extended family. Finally, find a way to leave your job at work. In the overall scheme of things, your job is much less important than family, friends, pets and good deeds.

I’ll now return you to your regular programming. For those of you who have read to here, thanks for your interest. I don’t have the space to get into how I got into EMS. I’ll save that story for a time when the muse eludes me. But, I’d like to wish every reader nothing but happiness and success in their marriage (as was the custom in those days) or their relationship (as is the custom in these days).